“You’re ancient and decrepit! And you adopted me, the embodiment of young, free, and wild?”

“You’re not that young, Auss. I recently read that they are comparing dog ages to human ages in a new way. Instead of saying that your one year is equivalent to 7 of mine, they’re saying that in the early time of your life the curve is much steeper, and later it flattens out.”

“That means that you, Aussie, a little over 2 years old, are equivalent in your life trajectory to me at 40.”

“At 40 I was living and working in Yonkers with Bernie and other Zennies.”

“I knew it! You were never frivolous and crazy. You never broke any rules!”

“Little do you know, Aussie.”

“Tell me some stories.”

“Oh, why did you ever adopt me? I don’t want to be raised by an old woman.”

“Aussie, I give you and Harry a big, beautiful back yard in which to play. I also take you out for your walks every single day regardless of weather. Who took you out in the snowstorm where there was no one else around, not even snowplows?”

“Did you think of what happens to me if you die? Did you leave me in your will?”

“Actually, Aussie, I did leave money in my will for people to take care of you and Harry. Not a lot, just enough.”

“If I’d known about this earlier I’d have asked Tim to dig you a grave BEFORE the snowstorm. Now there’s a ton of snow and everything’s frozen, and you’re too big to fit into the freezer alongside all our marrow bones. And between you and our marrow bones, guess what’s staying in the freezer.”

“Aussie, you are being very nasty today.”

“I’m being practical. Try to last till spring when the ground defrosts. Tim could dig a grave between Stanley and the tool shed, there’s enough space as long as you don’t put on more weight.”

“This is the nicest birthday celebration I’ve ever had, Aussie. Thanks.”

“Speaking of birthday celebration, what are you doing for your 70th?”

“Bernie wanted to do that, Auss. We talked one evening, four months before he died, about how much he was still exercising, and he said that he was working hard to get in shape so that he could take me away for my 70th.”

“Even then I knew he wouldn’t be in shape to do that.”

“So how are you going to spend the VERY FEW days left to you to live?”

“I wish you wouldn’t put it that way, Auss.”

“We have to face facts.”

“Remember the red dahlia that bloomed late in September?”

“Of course. What a dummy, I thought. If you’re going to bloom so late, why bother?”

“But it did bother, you see, Aussie? That’s the point. For some reason that red dahlia made it out of the ground late, and then it bloomed and opened up to reveal the most gorgeous color, remember? It could feel the cold coming but it relished every sunny day. Just days before the freeze it exploded and sent out so much beauty.”

“I want to fold back into fullness, Auss.”

“Not one bit.  As I go deeper and deeper into fullness I also open up to the world more and more. One goes with the other.”

“You’re not just going to sit and meditate, are you? If you are, I’m going back into adoption.”

“Don’t worry, Auss. I’ll do what I always did, but not much more. Personal epiphany is nice, but what’s even nicer is connecting more and more with humans and nonhumans—”

“No, everything. Even black matter across all space and time—everything!”

“Speaking of fullness, can you feed me now?”

“That red dahlia was fearless, Aussie. I’m following in her footsteps.”

“Okay, just don’t forget what we dogs do to flowers.”

“Pee on them. Just saying.”

The blog will be on retreat till Monday. 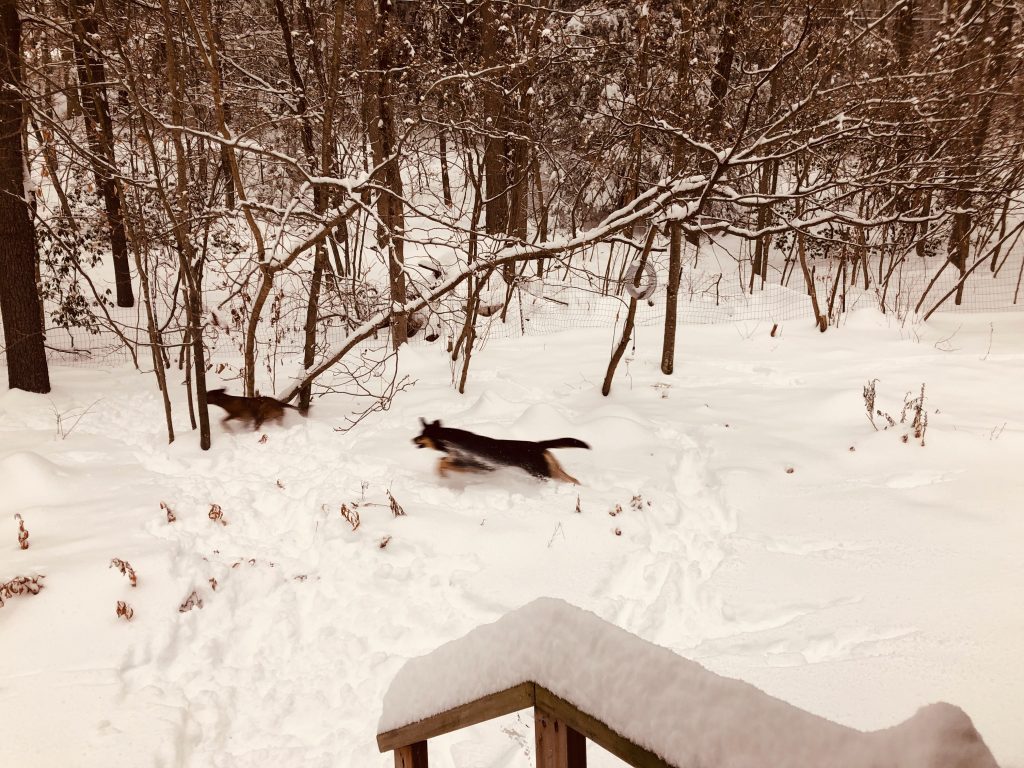