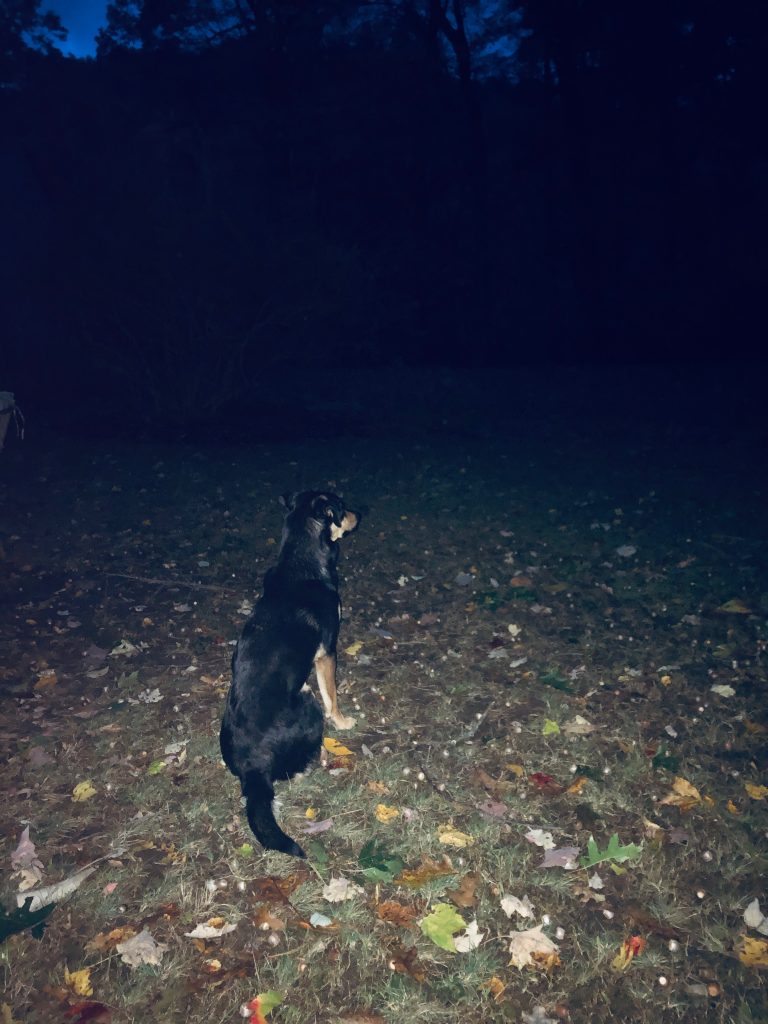 When I sit with Kwan Yin in the early morning, everything is dark. Aussie comes out and looks out alongside me while Harry, more sensitive to the cold, sleeps late. At first, everything is indecipherable, but as the minutes go by light returns, and you can see below what I look at when dawn finally comes up.

In my last blog I wrote of the previous night when I couldn’t sleep out of anxiety about money. I got the kindest responses from readers, offerings of empathy, love, prayers, and money, not to mention practical suggestions such as taking sleep and anti-anxiety medications. I appreciated them all.

The truth is that anxiety about something or other is one of many endless conversations that go on in my brain. It’s not the loudest conversation, and certainly not the most interesting. In fact, it’s a very mechanical monologue that I’ve heard many times, with the same key words repeating for added energy (like lines to get canned applause) and even the same pauses that enable the loop to rewind and start all over.

I learned long ago that Zen practice is probably not going to get rid of many of these conversations: Yes, but what about me?—How could I have ever done something like that!—How could s/he do that to me!—What’s going to happen to me now? What it will do is relegate them into background noise. It’s as if meditation is making a deal with some ADD students: You could stay and do your thing, but in the corner of the room. Or: You could keep on talking but bring it down a little, okay? My mind operates like a pretty well-run classroom most of the day.

The space of disconnection that I occupy since Bernie’s death gives lots more room for spillovers. When things don’t feel clear and certain, those kinds of conversations get louder and louder.

In the early mornings Awesome Aussie likes to remind me of not-knowing.

“If you go deep into not-knowing,” declaims the Zen dog, “you’ll find your answers.”

“Because when you really don’t know, Aussie, you’re letting go of your old ways of thinking. Since you don’t know, you can be curious about everything.”

“That’s me, Boss,” she says. “I get curiouser and curiouser, until—“

“Until the answer shows up.”

“That’s my point, Aussie. You don’t practice not-knowing to get an answer.”

“We practice not-knowing to go deeper and deeper into don’t know, not as an exercise to get an answer.”

“But don’t good things come out of not-knowing?”

“The minute you judge them as good or bad, you already know. See?”