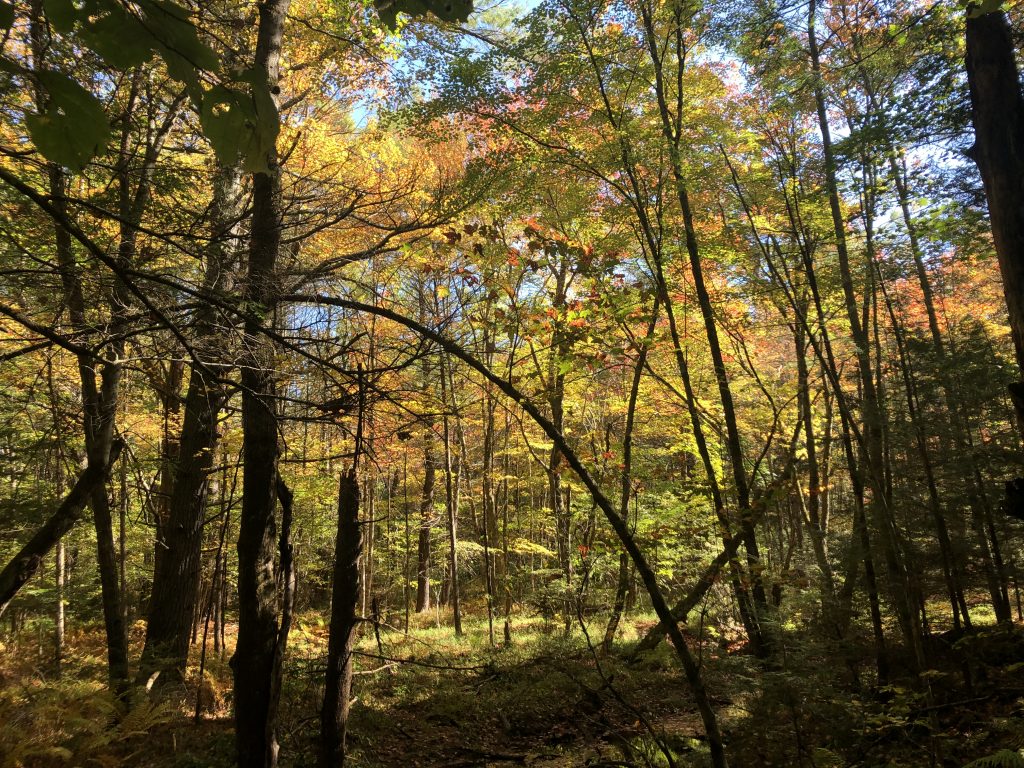 I take a photo of the same place every year. It’s our destination in a forest that I have walked in for some 15 years. Once I used to walk there daily till the snow got too deep, not just for my boots but also for the Pit Bull who shivered gamely through it. Now I walk here with Awesome Aussie and  Handsome Harry once or twice a week.

It’s the best medicine in the world.

From my desk I look out at our back yard and see the yellow and red leaves fall. It’s a warm, drizzly morning that will turn into a rainy afternoon. The leaves fall like tears of forgiveness.

When I walked HERE on Saturday I heard a rustle. I turned around, thinking I’d see one of the dogs running behind me, but there was nothing. I walked again, again heard the rustle, again turned around, and still no dogs. Again the rustle, and now I was a little concerned as I turned, wondering what animal made that noise. That’s when I realized the animal was me. A yellow leaf had fallen on my hair just above my right ear, and each time I took a step it rustled.

But usually the leaves fall soundlessly, like forgiveness. Forgiveness of how much I take the trees for granted as I walk among them, how blind I can be even in wakeful moments. Each leaf that comes down is a story I don’t know. And like every single story ever written or told, it’s a gate into someplace else, an invitation to plunge into your own yearning.

On this October fall day, what do you yearn for? I don’t mean superficially (I wish the TV repairman would call back or my kingdom for a chocolate bar), I mean that famous gap between life as it is and life as you wish it to be. That’s the gap into which I tumble, a yearning no longer for everything I want but to fully get what it is to be alive without getting what I want, live a life I hadn’t planned or wished for, yet here it is.

It’s just your story! In my old days of Zen training, that was the classic put-down. Who among us didn’t dread having that phrase flung at us as we talked our hearts out—ABOUT a failed love affair, an angry exchange with a child, the loss of something or someone treasured, or just some plain disappointment. Express it, give vent to some emotion, and that’s often what you heard: It’s just your story.

Now I know that every story has its gates. And if you walk through any one of those gates you’ll fall in and hang in the abyss between what you wanted badly and what really happened, between what you’d hoped for and how you’d messed up. Somewhere at the very bottom I’ve discovered a jewel that’s hard to describe, except to say that it has a lot to do with forgiveness. Usually, self-forgiveness.

I’m reminded of a story a friend of mine told me. Her husband died after five years of cancer. Years before that he’d go off on business trips to Asia and buy his wife jewelry. Once, before leaving on such a trip, he asked her what she’d like, and she, in that careless, carefree way we have when we think that life will never end, quickly sketched a brooch with a stone here and a stone there. “This color here, that color there,” as she described to me, hardly giving it a moment’s consideration. He took it with him, came back home without it, and she forgot about the whole thing.

He died in October. A few weeks later was her birthday and she got a call from a local jeweler whom they’d favored over the years. “Would you come over to the store?” the jeweler said.

“Are you crazy?” said my friend. “I just lost my husband, I’m not going anywhere.”

“Then I’ll come to you,” said the jeweler.

“Don’t even think of it, I’m not seeing anyone,” said my friend.

The jeweler arrived in the early evening, carrying a small box. She opened it. It held the brooch my friend had thoughtlessly sketched out to her husband years before. She told my friend that her husband had looked for it everywhere and, unable to find it, had asked her to find the pieces and assemble it, and paid her in advance. She worked on this as he lay dying. On the day he died she’d called to tell him she had it, and he gave precise instructions that on his wife’s birthday she should give the brooch to her.

The jewel I’m talking about goes beyond life and death, though you could call it anything, including love, forgiveness, and eternity.

Bernie bought me no jewelry. In fact, he bought me almost no gifts except for See’s Chocolate which he would bring back from trips to California. But he knew about that jewel that lies at the very bottom of our yearnings. He didn’t talk of it as I do, with words and feelings, but especially after his stroke, he dove deep into murky waters in search of it.