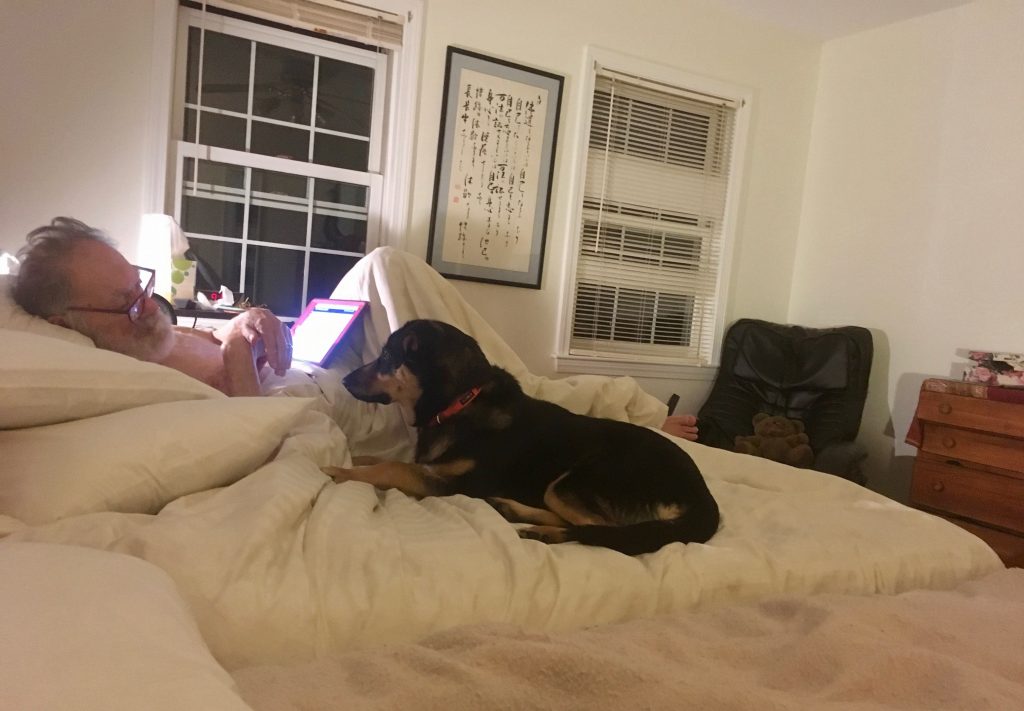 “I hate it when you sing those stupid songs.”

“I also hate if when you say Aussie Mossie over and over again. Speaking of which, I hate the name Aussie. Could we change it please? I’d like to be called by my true name.”

“I can’t do that, Auss. Bernie gave you this name. One year ago he and I brought you home. You were a year old at the time, so now you’re two, Aussie, getting into adulthood. A role model for Harry.”

“A role model? Moi? Don’t even think it. I’m not taking on Harry’s education.”

“The point is, Auss, you’re here because Bernie wanted you. Our old dog Stanley—“

“The one who used to haunt me in the old days?”

“—died in August and I wasn’t up to bringing another dog in till spring, but Bernie wanted another dog. That was very unusual for him.”

“Why? Wanting dogs like me is the most natural thing in the world.”

“Not for Bernie, he wasn’t much of a dog lover, but that all changed after his stroke. He started loving the world more, his family, his students, Stanley—“

“Even me. And when there was no more Stanley, he asked for another dog.”

“Would he have asked for another wife if there was no more Eve?”

“Every day at dinner he’d say: ‘When are we going to pick another dog?’ That was a small miracle by itself.”

“So we went to the local shelter and there you were, fresh off the truck from Houston, Texas. You were a real sweetie then, Aussie, not like what you are now, headstrong, stubborn—“

“An escapee, don’t forget that. Another one of my true names: Escapee.”

“—always running through the fence. Your basic pain in the neck.”

“I’m a fugitive from justice, that’s what I am. That’s another good name for me: Fugitive. With all these terrific names to choose from, how come he called me Aussie?”

“We were told you were an Australian Cattledog—“

“Me an Australian Cattledog! Fools.”

“—so he named you Aussie even though it was clear you were no such thing.”

“You mean, I got a name based on something I wasn’t? Why would he do that?”

“Aussie, you know what your name should be? Gap.”

“Sometimes I sit there and get into my head. Think about the past, think about Bernie, think about the future, get into some silly memory, and suddenly you’re sidling into my knee or else you make that strange nasal long sound—neeeeee—“

“That’s it, Auss. You’re the most voluble dog I’ve ever had. But when you make that long sound you take me out of myself. A gap appears, see? I stroke your fur, check out if you’re shedding—“

“I hate it when you brush me—“

“—play with your soft ears while you press into my leg like that. It’s like I’m back home in the moment, with you, with Harry, just where I want to be and nowhere else. You provide that gap, Auss. You bring me right back to myself.”

“But you never left!”

“True, but humans in some way do leave. I don’t think dogs do, but we go deep into our stories sometimes and find it hard to get out, till someone like you comes over and pushes against us, and reminds us.”

“I’m a real Bodhisattva, that’s what I am. Hey, you could call me—“

“No, Auss, I’m not changing your name. You’re keeping the name Bernie gave you.”

“A name for what I’m not. I’m also not brilliant or gorgeous, but did you call me Brilliant or Gorgeous?”

“There you go with one of your koans. ANYTHING BUT AUSSIE!”