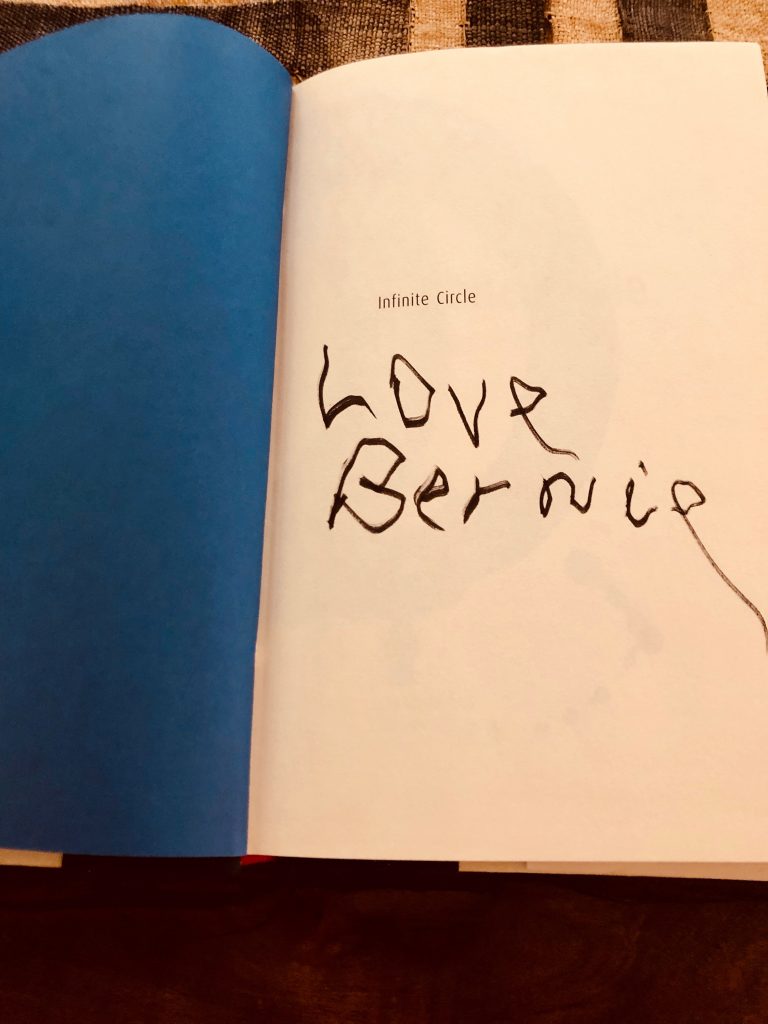 I packed to go to Switzerland to teach, and thought of bringing a gift. So I picked up my favorite of Bernie’s books, Infinite Circle, turned idly to the flyleaf before putting it in the valise, and saw that he’d signed it. I looked, sighed, and put it away. That copy, at least, I’m keeping close, at home.

A friend of mine wrote me of his very new (and first) grandson, and simultaneously of his wife who is now in hospice care after years of struggle with cancer. He ended by quoting Lao Tzu: “With eyes unclouded by longing.”

I sent him back the photo above: Love, Bernie.

Yes, that kind of love. Not the love of shared enthusiasms, of happily venturing out of rural Massachusetts and out into the world, of packing the same black Eagle Creek canvas bags a quarter of a century old accompanied by the usual chatter:

He: “I finished packing.”

He (with a groan): “Okay, let me do it. Let’s start from scratch (empties out everything).”

Not the love of driving down to the airport before dawn with the usual banter:

She: “So what are we going to be teaching?”

He: “You know I never plan ahead of time.”

Not that. Instead, the kind of love you scratch out with the other hand, the one not paralyzed by stroke. The kind of love you transmit by computer screen rather than through a hug, or through hanging out outside the building with your students so that you could have your cigar, because you’re not traveling anymore. You’re not crossing any ocean, you’re not looking out over any clouds. All you can do is look at that screen and hope people get the message. Or else scratch out two words on a flyleaf of a book written long, long ago: Love, Bernie. (While Infinite Circle came out around 2001, the talks it’s based on were given in the early 1980s).

I can’t speak for Bernie, but for me it was a love filled to the rafters with longing. Not a love that found its place, that found some permanent peace. That might have been true for him, ever the pragmatist, but not for me. My eyes, at least, were not unclouded by longing. What’s a romantic doing in Zen?

Everything collapses into Love, Bernie: memories, sorrow, jokes, complaints, the shared drives in the car (She: How come you’re going 10 mph? He: I‘m thinking. She: You know there’s a convoy behind us a mile long.), the coffee cup held hazardously as we rattle up the driveway, the pleasure of leaving yet knowing you’ll both come back home to joyous dogs and bird feeders that need filling. Also, the chasms that separated us. Hope, too, is in those two words, hope for more rather than less love, deeper and deeper connection all the time.

Perhaps the love of God is not clouded with longing, but of a person? A man, a woman, a child?

The goldfinches are back. Not the hundreds from that first early spring of 2016 after his stroke, when they crowded around 3-4 feeders hung outside the room we converted into a bedroom on the ground floor. Dozens and dozens of them now, filled with the optimism of spring.