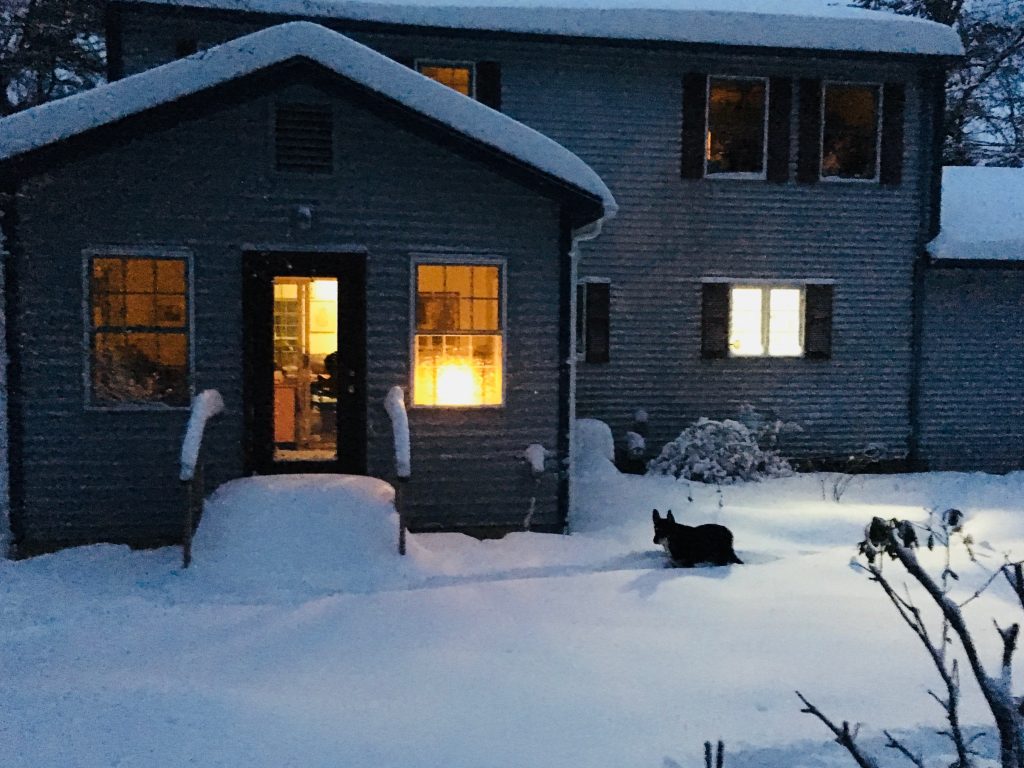 Early this morning I went out to turn on the car and get the heat going before driving to Greenfield. The cold gave me such a bite that my body contracted. But then I flexed the hand open and took in a big breath of freeze, and I tell you, there was love there.

The love of icy winters with squirrels playing on the slope, swinging along the bird feeders, and even the tufted titmice surprising you by how they survive it all, flying in for pecks of sunflower seeds. Once I asked Peter Matthiessen how birds survive through our long, dark, icy New England winters, and he shrugged and said, Don’t worry about them, they have so much down.

One day you come to your senses and realize that it’s all love.

After all, whatever it was that exploded in the Big Bang and expanded and expanded over billions of years into planets, suns, pine trees, hawks, raccoons, Bernies and Stanleys, it could have just stayed still and never given rise to anything at all. It could have remained just some highly compact mass on the head of a pin, hoarding all that energy to itself, stayed in bed, so to speak. It could have said it had a headache, everything (or rather, nothing) was just too much for it and it couldn’t do anything more.

Instead it expanded and gave birth endlessly. That’s not an act of generosity, it’s an act of love.

And you realize that each moment is a gift not deserved by you or anyone else. I’m not quoting Rumi or Hafiz here, I’m talking about receiving life without doing a thing to deserve it. That’s when you start seeing the morning frost as a love bite and the summer heat as the great sizzle, with everything in between the grand buffet.

The big condition was that each new form came at the expense of another, which meant that we all had to die sometime, and maybe that’s where fear came in, along with judgment, greed, stinginess, and war: No! no! no! no! I want more!

A teacher of mine told me the other day that she had met a man she really liked who really liked her, after years of being alone. A month later he had a stroke and she said: Already? We just started! Couldn’t it wait a little?

I felt like telling her that that’s exactly how I felt when Bernie had his stroke. Already? We’ve only been together as a couple some 18 years, and teacher/student for the previous 13. We only got started! Couldn’t it wait?

It feels like moments, even when it’s years. Even when it’s a century or even an era. And all of it—the sun, the shade, the in-betweens—one long, steamy smooch.