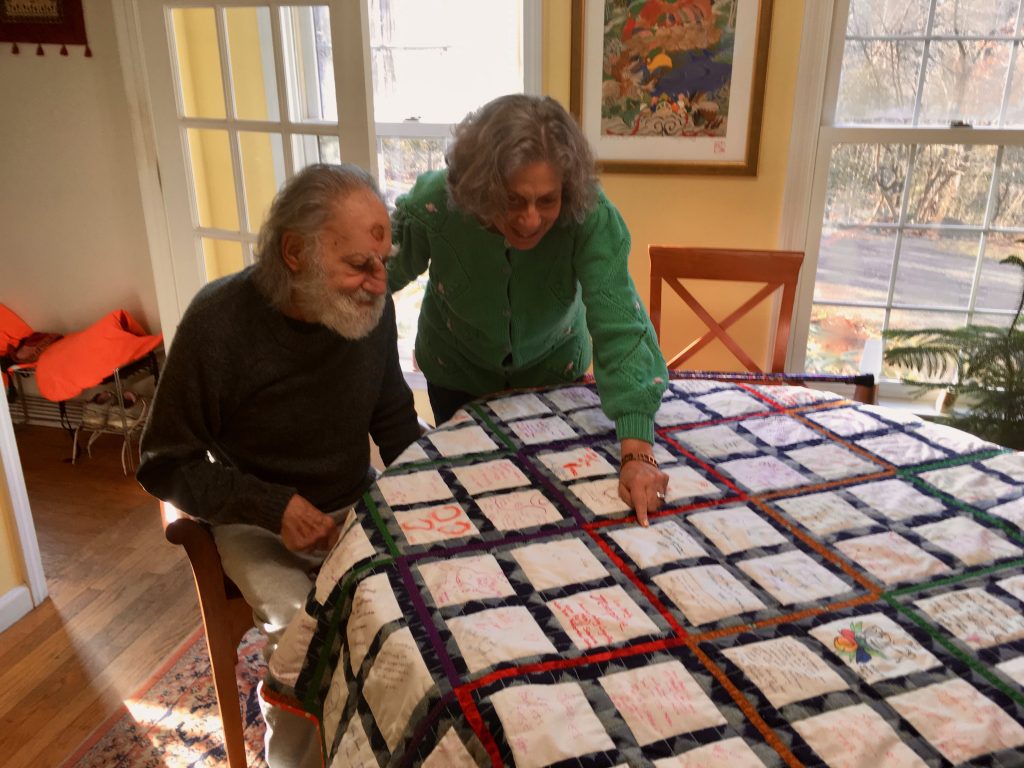 I think I count 80 panels, I tell Bernie.

80 panels of messages from teachers and senior practitioners over almost 50 years who wrote their thanks and good wishes for Bernie in a Memory Quilt.

One said Hang in there, man. Bernie’s nose looks funny—I call him Elephant Man lately—because of the surgery done to his nose to extricate carcinoma. A big hole, and there’s still carcinoma left. So a second surgery will take place before Christmas to restore his nose to its former glory, and once that heals, radiation.

The good news is that Bernie has a Third Eye. Of course, we knew that for many years, but it’s become more visible lately, which probably accounts for the special vibrations we’ve been feeling in the house.

The woman who put the Memory Quilt together is June Tanoue, a teacher of Hula and Zen practice. Back at the White Plum Asanga meeting that took place last June in Los Angeles, she pitched the idea to various teachers there, then followed up with those who weren’t there, and the result is a quilt of some 80 panels of memories, gratitude, and love from folks in Japan, Europe, and the US, compiled and finally sewn together by June.

I had no idea June was doing this, I tell Bernie.

Oh yeah? says he. What about this? And he points to a panel that says: Om San Ma Ya Sa To Ban, I am the Buddhas and they are me. The date says: December 1986-ongoing. And it’s signed: Eve

Those words are from the Gate of Sweet Nectar liturgy, celebrating our recognition that we are all Buddhas, awakened beings. And back during a retreat in 1986 I told him that while I recited the words like everyone else, I didn’t believe them. So I can’t say them, Sensei, I explained.

Sure you can, he said. Say them now.

I looked at him stupidly. I am the Buddhas and they are me.

I kept on saying and chanting those words all these years. Somebody forged my name, I tell him.

He looks at the drawings and the words, from people who have known him over half a century. We should hang this up, he says.

June suggests you use it as a quilt, to cover yourself with all that love, I say.

He mulls it over.

Forget it, says Bernie, we’re hanging it up.