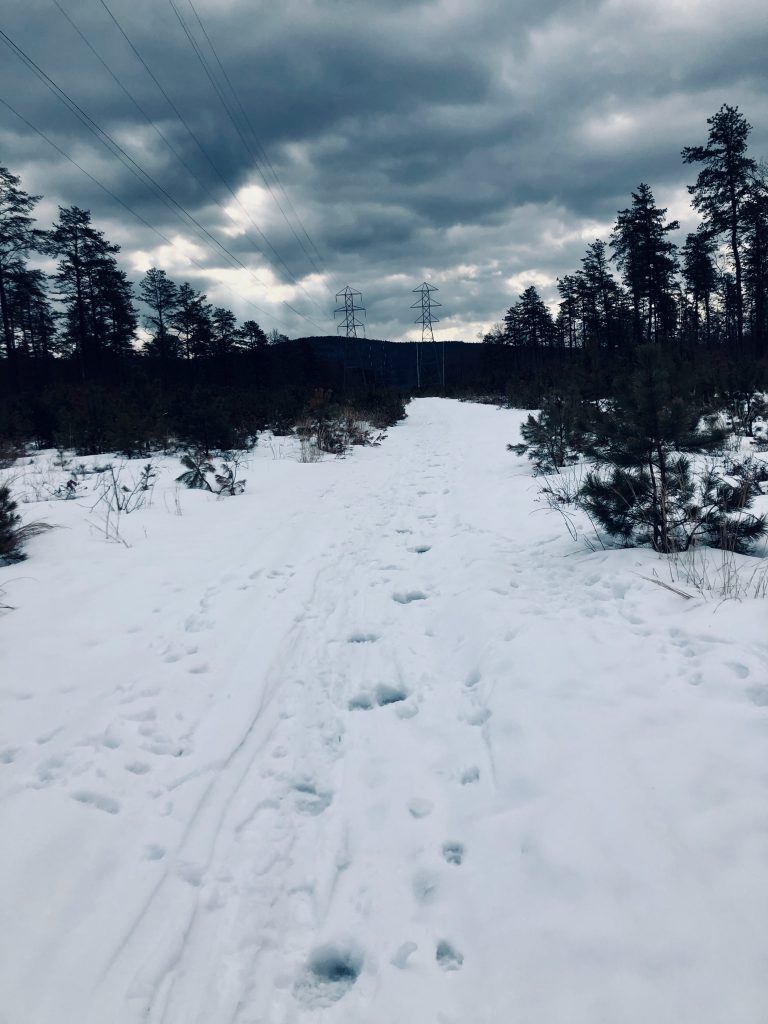 This is the frozen landscape we’re accustomed to, not the warm weather we’ve had till now. The nice thing about snow, cold, and ice is the starkness of the landscape. The trees are barer and the shrubs, bushes and stalks are completely gone. Everything is vastly simplified and you espy the contours of the hills and valleys, and the small tunnels in which creeks become rivers. You see the earth at its most basic, before the adornments of vegetation take over.

Sometimes I think that that’s my landscape too as I get older, not as full of things, activity, people, and travel. I had such an adorned landscape for my life, but now it’s rich in a whole other way. It’s just life, my life, and what’s up for me is how to walk the icy terrain in my old boots with yaktraks and not slip and fall. Be careful, yes, but watch the beauty around me and the races being run.

“Aussie, stop rushing into Henry and taking him down. He’s a quarter your size!”

“I love crashing into him, he doesn’t have a chance.”

“It’s where you and Henry win, not just you.”

“I prefer win/lose, because I always win and he always loses.”

“Why does one have to come at the expense of the other?”

“Because it’s more fun that way. I not only win, I also hear him whine when he hits the ground.”

“Only sometimes he cries out because you hurt him. And it’s not fair, Aussie, you’re bigger than he is.”

“Of course it’s fair. I run hard to beat him. You know how many squirrels I’ve shaken by the neck as practice to throwing Henry down to the ground? It’s dog-eat-dog out there, and I’m the one doing the eating.”

“But Aussie, you’ve also inherited certain ingredients that make you faster from your parents.”

“Aussie, can you imagine a play situation where you both win?”

“How about you chase him without running him to the ground? Or you could slow down a bit, that way you’re still chasing him but you’re giving him more room to run.”

“What kind of challenge is that? The fun part is winning, always winning!”

“Oh Aussie, it’s so important to look at how to help others win, not just ourselves. And not just now, but across generations. That’s why the Native Americans talk about considering things down to the 7th generation before making any decision.”

“They’re losers, that’s why they talk that way!”

“In this competitive win/lose way of life, we’re all losers eventually, Aussie, it’s bringing us to the very edge. We commodify everything in order to win, and the riches we accumulate we leave to our children so that they have a big head-start over everybody else. It can’t go on this way, the earth won’t let us. Things are too fragile, we’re not living for the long run. At some point Henry will stop running, or else you’ll really hurt him one day and that’ll be the end of racing, except for our race to the cliff.”

“OK, I’ll give Henry a couple of licks to make him feel good, but I’m still going to win and throw him down on the ground.”

“It’s like saying we’ll race to the cliff in a nice way, help each other out a little, send aid to countries with famine and tanks to Ukraine, but we’re still racing to the cliff.

It reminds me of years ago when I lived in Manhattan right above the route of the New York City Marathon. Thousands of people would run uptown along First Avenue and I would join the crowd on the sidewalk, cheering them on, and people would run alongside the runners and hand them bottles of water to drink, trying to help the runners get to the finish line. Only our finish line is the cliff, and I start wondering if that’s what I’m doing, too, supplying comfort and help to the runners, only this is a race we’re all running, not to Central Park but to the very edge. Get it?”

“No, Quick, I’m off chasing down Henry. Save it for later, okay?” 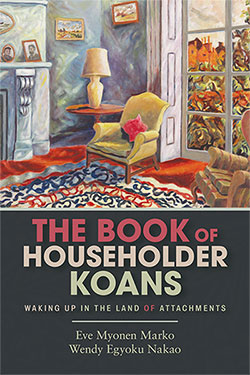 The Book of Householder Koans is a collection of koans created by 21st century Zen practitioners living a lay life in the West. The koans deal with the challenges of relationships, raising children, work, money, love, loss, old age, and death, and come from practitioners across three continents, and with commentaries by two Western teachers. 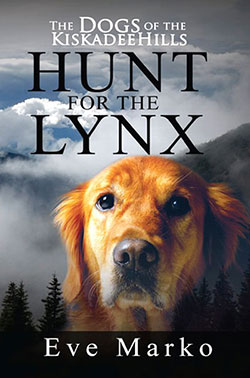 To bear witness to anything is to be as close to it as possible.

It’s not to read books or see movies about it, it’s not to have an opinion or tell a story. It’s to let go of all ideas about it—be in the space of not-knowing—and simply be there, up close and deeply personal.

Eve has been involved with the Zen Peacemaker Order’s Bearing Witness Retreats—in places of suffering and conflict since her first visit to Auschwitz-Birkenau.

There have been 20 retreats at the site of those concentration camps since, along with retreats in Bosnia, Rwanda and the Black Hills of South Dakota, near the Pine Ridge Reservation.

Eve Marko is a Founding Teacher of the Zen Peacemaker Order and head teacher at the Green River Zen Center in Massachusetts. She received dharma transmission and inka from Bernie Glassman. She is also a writer and editor of fiction and nonfiction.

Eve has trained spiritually-based social activists and peacemakers in the US, Europe and the Middle East, and has been a Spiritholder at retreats bearing witness to genocide at Auschwitz-Birkenau, Rwanda, and the Black Hills in South Dakota. Before that she worked at the Greyston Mandala, which provides housing, child care, jobs, and AIDS-related medical services in Yonkers, New York.

Eve’s articles on social activists have appeared in the magazines Tricycle, Shambhala Sun, and Tikkun. Her collection of Zen koans for modern Zen practitioners in collaboration with Roshi Wendy Egyoku Nakao, The Book of Householder Koans: Waking Up In the Land of Attachments, came out in February 2020.

Hunt for the Lynx, the first in her fantasy trilogy, The Dogs of the Kiskadee Hills, was published in 2016.

“When I was a young girl my dream was to be a hermit, live alone, and write serious literature. That’s not how things turned out. I got involved with people. I got involved in the world. Two things matter to me right now: the creative spark and the aliveness of personal connection. In some way, they both come down to the same thing.”