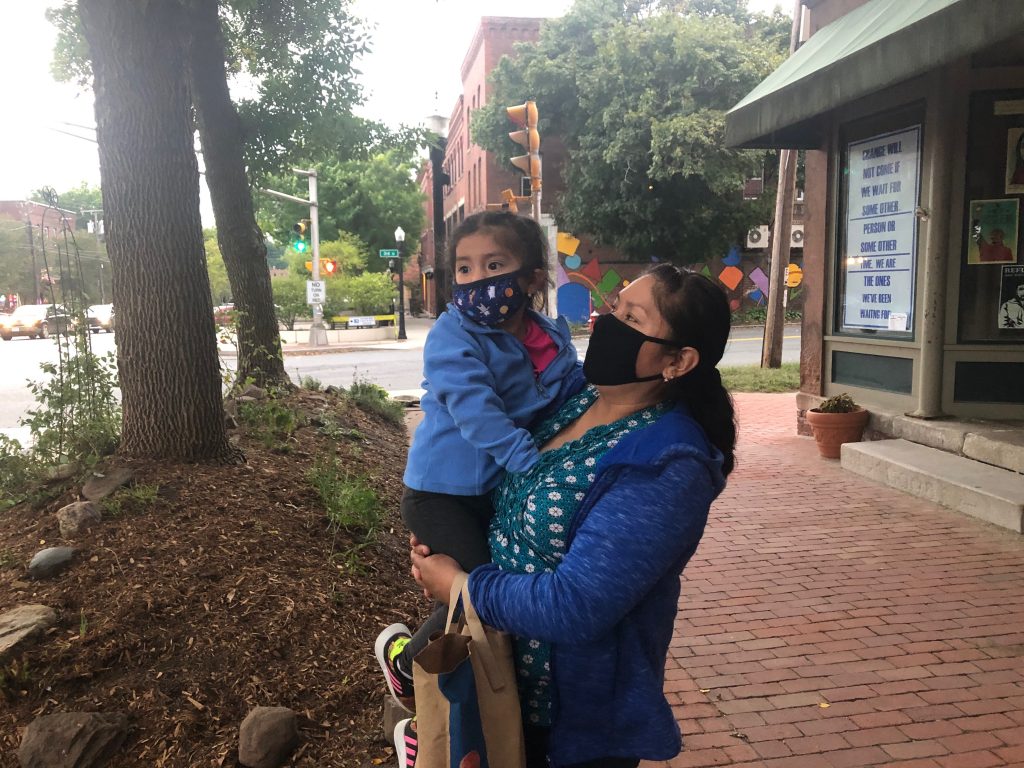 “I’ve been thinking a lot, Chavale, and I finally decided: My conscience is clear.”

“Conscience about what, mom?”

“About the family. I can’t say anything about your father, he’s his own responsibility. But you children were my responsibility and I think I raised you right, right?”

“By that I mean that the most important thing is to help others, and all three of you do that. That’s what I tell my friends. ‘You want to be happy, help others. Maybe at first, doing bad things feels good, but in the end it won’t.’” She thinks a little. “I just don’t understand why life is so tough.”

“You mean, the closing down, mom?” Beginning last Friday afternoon, the eve of the Jewish new year, Israel began its second full shut-down, with residents limited in how far they can wander from home and checkpoints and police on the city streets. My brother and sister got written permission they wave to the police in order to visit my mother.

“Not just that. I have to speak more to God.”

“On the eve of Yom Kippur [Yom Kippur has not transpired yet, it starts Sunday night, September 27] I spoke to God and I told him, ‘There’s a problem with creation. You made human beings to do good, not bad, so why do so many still do that? Why is life so hard? Something isn’t working in the creation. Somebody goofed here.’”

Over the past several days we’ve been on the cusp of winter. Temperatures plunged, especially nighttime, and for the first time that I can remember I put the heat on before October. We had frost warnings and I brought in some plants, though the mornings have shown no frost so far. It’ll warm up tomorrow, so the flowers have to survive one more night before returning to  more days of sun, but the end is inevitable. Some are already careening over and nothing flowers anymore.

For the past month, since reading of cancer appearing in her pancreas, she’s been on our wellbeing list, so I wasn’t surprised when she died. I was shocked. Somehow, I thought that someone as strong as she could cheat death, at least till January. I visualized her lying back after the inauguration of Joe Biden and saying, “Now I can rest.”

She’s resting now; not me.

She’s been quoted a lot lately, but the words that really spoke to me were her words on dissent, which she had to do plenty of on a conservative Supreme Court:

“Dissents speak to a future age. It’s not simply to say, ‘My colleagues are wrong, and I would do it this way.’ But the greatest dissents do become court opinions, and gradually over time, their views become the dominant view. So that’s the dissenter’s hope: that they are writing not for today, but tomorrow.”

What about Ginsburg’s seat being replaced by Republican senators? What about if Trump, against all odds, wins in November? What do I do?

I’ll dissent, that’s what I’ll do. I’ll say to whoever’s listening that this doesn’t work according to my understanding. I’ll take courage from Ginsburg’s words. It’s not for now that I’m fighting, it’s not for me or my peers, those of us who have fewer years ahead than behind. I dissent for later, for future generations. I’m not predicating anything on results today or tomorrow or next month or even next year.

One of my ways of dissenting, in this grim, uncharitable time, is to do the opposite of what my self-preserving instincts tell me to do: loosen up, and instead of grab—give. So I made up an Amazon Wish List for the children of immigrant families who got Dell Chromes from their schools but no headphones, no backpacks, no notebooks, no calculators or protractors, no money for paper and binders and even crayons.

The list includes two expensive calculators for igh school students studying calculus; the rest are backpacks, more moderate calculators, and also items many of us would find cheap, like index cards, graph paper, flash drives, and sticky notes. In a family that struggles to feed its children, there is little money for such “extras” even though their teachers gave us this list of items, indicating they’re essential, not extras. You can find this Amazon Wish List here.

For now, the items will come to me and I’ll bring them to Jimena. Whatever you could afford to help these children learn would be greatly appreciated. You can also use the donate button below to send money for food cards, or else send a check to me: Eve Marko, POB 174, Montague, MA 01351.

I feel like saying, “Do it for Ruth.” Instead, I invoke my mother: “That’s what I tell my friends, you want to be happy, help others.”