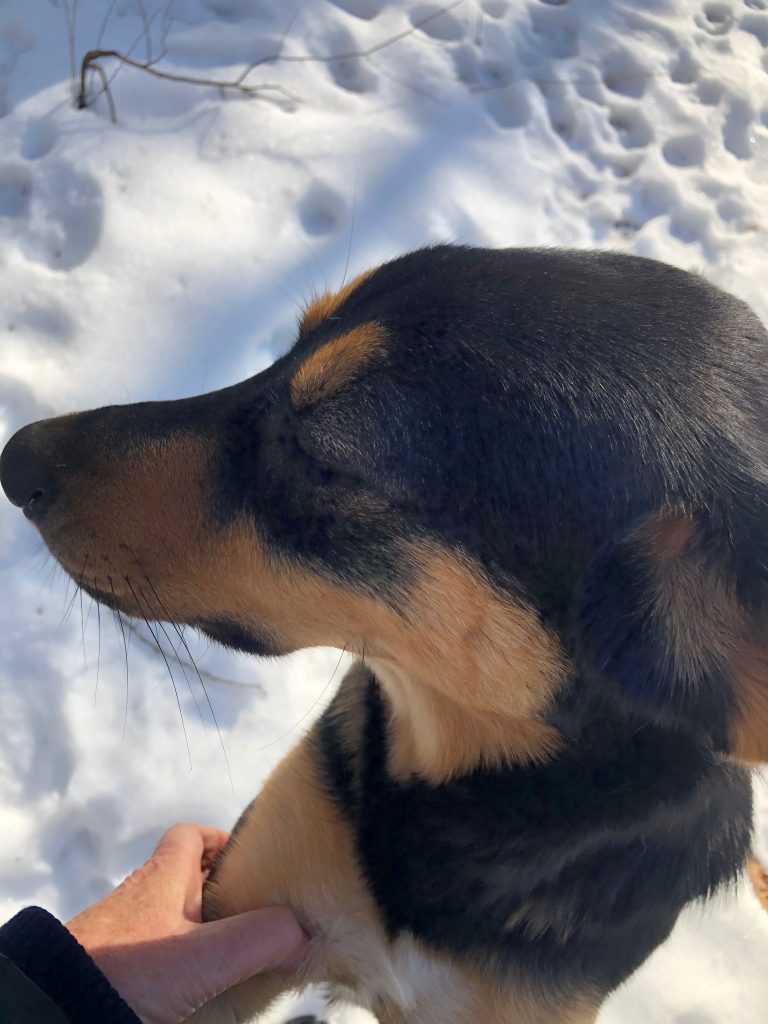 “I do birthdays, Aussie. I love to celebrate, get a cake, go out. We’re also celebrating that you’ve been here two years! Remember when you came to us from Texas?”

“I was supposed to go to Washington and be the White House dog, but the truck got lost and here I am.”

“And lucky for you, Auss, because you’d be homeless once again after January. They’ll throw you out to the streets, you watch.”

“Naah, you’re a New England dog now, Aussie. Remember how much you love the snow?”

“Being a Dixie dog is not so kosher anymore, Aussie. People don’t like Dixie because it brings up the antebellum South.”

“What happens to Dixie cups?”

“You know what else, Auss? Ruth Bader Ginsberg died.”

“I’ll miss her very much. She was so fierce and honest. Some people say it’s a catastrophe, but actually she lived a long time and was very ill, she couldn’t go on much longer. She once repeated this advice that her mother-in-law gave her:  ‘In every good marriage it helps sometimes to be a little deaf.’”

“It helps to be a little deaf. Meaning that if somebody says something nasty or insensitive to you, it’s not bad to pretend you’re deaf and never heard it.”

I didn’t know RBG died Friday till I returned from the zendo this afternoon and opened up my computer. The media, of course, gave some space to Ginsberg’s humanity and achievements but focused bigly, in Trump’s words, on the politics of her death.

I almost wrote dirty politics, but politics isn’t dirty in and of itself, it’s how it mixes with our fears and small, stubborn insanities that makes politics dirty. Instantly the ramparts go up, the archers and shooters take their place, and instead of embodying Ginsberg’s combination of fierceness and respect for all, we’re into hate and contempt.

The more I actively resist getting pulled into the vitriol of this election, the harder life seems to make it for me, almost as if it’s saying: You thought you could weather these lies and calumny that are our daily Presidential staples—now see this! Where is your peace now?

Ruth Bader Ginsberg centers me. She was fierce, but not insulting. A lady, but at no cost to her brilliance or tenacity. She stood firm, using her skills and gifts to push the horizon just a little further, and a little further. The choice between resignation and backlash isn’t the only one available to us. If anything, these are the times when we should take a break to mourn and reflect on what we’ve learned from her.

Today was the first morning we returned to the zendo to do a memorial service for a man who died so young. I  reflected on the vast hope we put into our children, how much we want them to be well, to succeed, to be happy. I could see the young man’s photo close by while the trees outside waved and fluttered, clearly aware of fall.

That’s what I want to be like, I thought. I want to sit like a tree, stand like a tree, and move like a tree. Be strong and centered, giving and taking with the seasons, harboring life inside and underneath, in silent, endless communion with the rest of the world.

Instead, I got angry after reading the papers.

“I can’t believe that you want to be THAT MAN’S dog, Aussie.”

“You know how he loathed RBG? He hates strong females, Auss.”

“Comes January they’ll throw you out of that White House quicker than you could say Boo.”

“And stop pretending you can’t hear, you’re a dog, you have better hearing than I do.”

“I’m pretending to be deaf so as not to ruin our relationship. Try to be a little grateful for my wisdom and maturity. From now on I won’t hear a word you say. Nothing will penetrate, promise.”

“I bought you steak for your birthday, Aussie.”