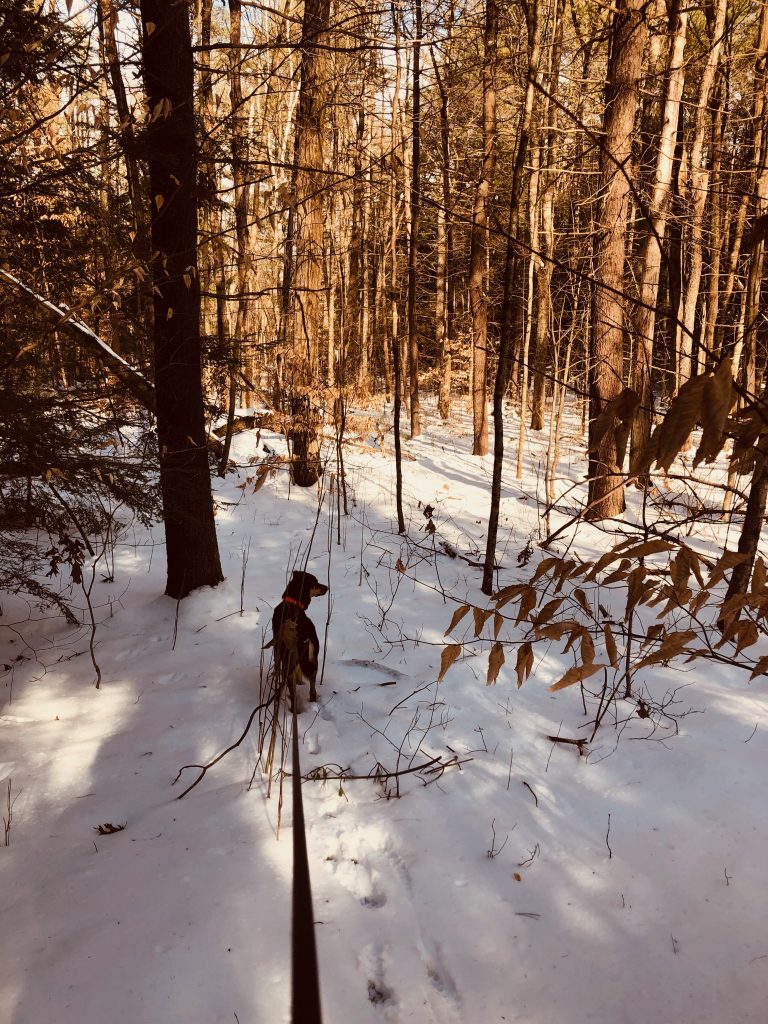 I called a knowledgeable and generous friend and asked his advice about what to do with my dog, Aussie, who’s already managed once to escape the new fence (expensive—the bill just came in) and who runs into the woods for hours. He suggested I give her up. You have a lot on your plate, he said, a lot of unknowns, and your dogs should support you, not become the central feature of your life plan.

Whom do I give her to, I wondered. He responded that there are people who don’t mind if a dog runs around all day and returns at night: loggers, hunters, even farmers. And there are rescue groups, he added, that are really good at finding these people for a wild dog like Aussie. Dogs are meant to serve people, not the other way around. When one takes up so much energy and concern, you have to consider whether she’s right for you, he said kindly.

I appreciated his advice and told him so. But that night I woke up at 2 am and couldn’t sleep. Something was coming up for me that had nothing to do with Aussie, but my own struggle with the voices I listen to, and those I ignore.

First, I recalled that there’s a side of Aussie others don’t know, that I rarely write about here. She has a sweet and soft side to her nature that is a big contrast to the wild dog I usually describe, who takes every opportunity to run. I go downstairs in the early morning when it’s still dark for coffee and to raise the heat. Harry is fast asleep on the sofa; he won’t get up till breakfast. But if I enter my office, where Aussie likes to curl up on the futon, I hear a flap-flap-flapping of her tail. I sit by her and stroke her fur, and she rolls onto her back so that I could stroke her belly. When I pause she paws at my hand, asking for more.

Early morning is a time of intimacy between the two females in the house.

She’s also the most voluble dog I’ve ever had, using the widest array of whines, whimpers, cries, and barks that I’ve ever heard from a dog to communicate everything from I’m hungry! to Open the door! to Let’s go somewhere! to Let’s play! to Stroke me.

But that’s not all I thought about that night.

My daytime, wide-awake voice is the rational voice, the voice of discipline and will. That’s the one I’ve followed for most of my life. It’s the voice that says –Yes, you may have to do this. After all, you have to take care of things in the right way. If there’s a will there’s a way; this is no exception.

The middle-of-the-night voice is different. It’ the voice that kept me up all night on the July eve of leaving for our Native American retreat, where I serve as one of the organizers.  Bags were packed, dog care arranged, house and car ready. But I couldn’t sleep, and as I sat there by candlelight I could hear the old, stern voice, the voice of commitment, of a promise made so a promise kept, the voice of discipline rearing up its head and saying: No matter how you feel, go.

It took me all night to listen to the quieter voice of intuition, the voice that surveyed the devastated internal landscape 6 months after my husband’s death and said: You can’t.

Last night I again sat there, trying to listen to that quieter voice, the one that only now is stretching its muscle and learning to speak. The one that says somehow there has to be more give here, it’s not black and white. The one that recalled the paw scratching on my knee and the high-pitched whine of an animal communicating clearly.

The daytime voice was also there: She takes too much out of you; she’ll stand in your way, you won’t have the flexibility that you need so much now, after B’s death. Where there’s a will there’s a way.

Ah yes, the will. The will to make things happen, to overcome, to never ever take the back door out of a situation. There’s discipline there, and also coercion. There’s rationality there, a cold and lonely country.

As I sat there Harry came up the stairs. He approached, looked at the bed as if wondering why I’m not there, turned around, and went back down to sleep with his pal Aussie.

All my life I’ve listened to will rather than intuition. My model was my mother, whose admonishment to me, long before Obama, was Yes you can, you could do anything. It doesn’t matter what else happens, and it certainly doesn’t matter whether you feel like doing it or not. In fact, what you feel like has nothing to do with anything, it’s the words that count. It’s the will, always the will. You have to do what’s right for yourself, the dog, the world.

How much of life does right capture?

Yes, I can appears simultaneously with No, I can’t. Can I listen to the second as I do to the first? Am I even open to No, I can’t? Am I listening to body as well as mind, to the emptiness inside that whispers to me as though I’m a shaman? Do I have to train as a shaman to listen to those voices, or do I just have to untrain somewhat the automatic yielding to: You must, you can, you will!

This battle between voices took place last night. I was open to both, still am. She’s meant to be there for you, not you for her. And the voice that whispered of a connection to this wild dog, that she’s here for a reason.

Fertile ground for projections, of course. Still, there’s a beckoning everywhere I turn. Can I watch and listen patiently, like Aussie sniffing and listening to animals up the hill? The fence prevents her from running up there, but still she stands silently, waiting. On a few occasions she manages to run, mostly not. Anything can happen, anything.

Please consider supporting this blog. Dollars and cents do matter, even more the caring behind them. Donations and caring of all sizes are deeply appreciated.