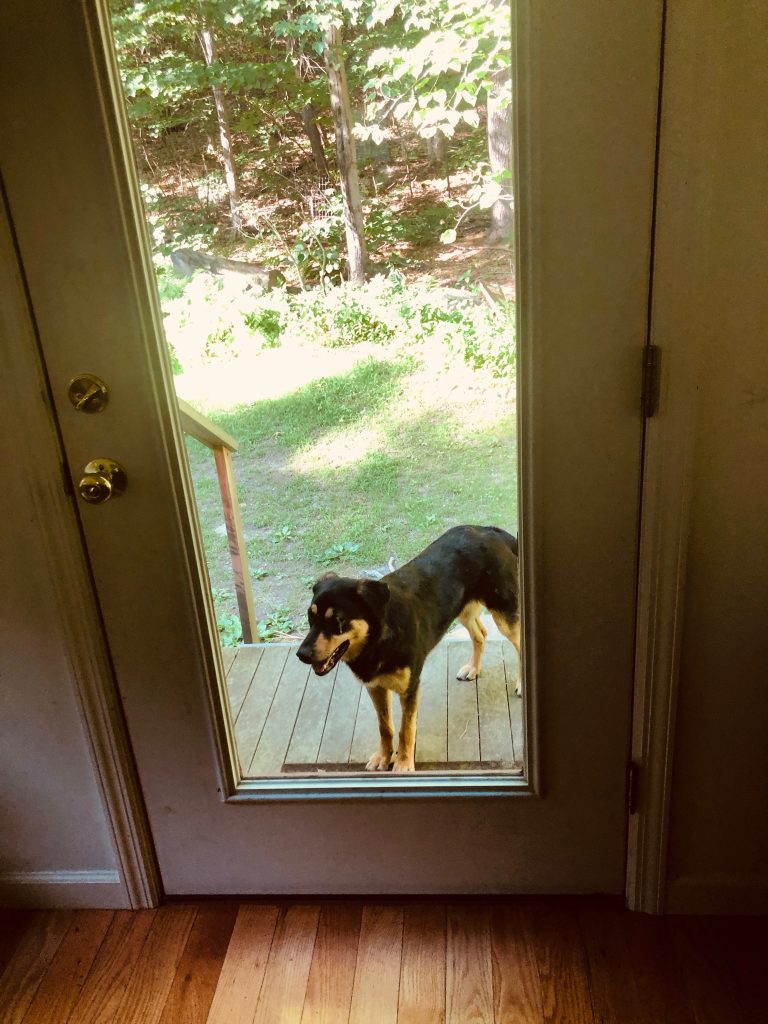 “Aussie, I’m not opening the door for you. What are you doing outside on the front steps early in the morning?”

“Why are you coming downstairs so late? It’s already 7!”

“I couldn’t sleep half the night wondering who opened the dog door.”

At night I take the dogs out for a final pee, and then shut the dog door in the kitchen, meaning I close up the aperture in the door through which they usually run out to the backyard by inserting a thin wooden board through the slots. This blocks them from their usual exit.

“Guess!” she says, wagging her tail excitedly and rushing in. “It was me, Nu-nu-nu, Breaker of All Rules.” Her eyes sparkle. “Why block the dog door anyway?”

“Because otherwise you and Harry would be running out and barking all night, which will make Tim, our neighbors, and me very unhappy.”

This worked till last night. Around midnight I heard coyote yips and barks. Unconcerned, I turned and went back to sleep. An hour later I woke up, feeling it was strangely quiet. I went down and saw that the wooden board had been nudged up. There was no Aussie, and no sleep.

At 7 in the morning I looked out the front door and there she was, lying patiently on the top step. Needless to say, she not only managed to nudge open the dog door, she also found another way out of the fence and was gone.

“You were always the trouble-maker,” my mother told me.

She didn’t stop badgering me about being more Jewish, observing holidays and kosher rules, and generally being a more acceptable daughter till I was past 50.

“What do you mean by trouble-maker?” I asked her some years later, when we were finally able to have this conversation.

“You were crazy,” she said. “Or at least,” she mercifully corrected herself, “you were different.”

“You were independent, you knew what you wanted and what you didn’t. You were like this from a very young age, stubborn. Other children grow up and later decide if they want our life or not, but you rejected it right away. You were such a rebel we didn’t know what to do with you.”

I almost felt sorry for her, watching her contemplate all those misadventures.

“I’ll say one thing for you,” she added. “You were consistent. You never let anybody tell you what to do, not then and not now.”

So of course, I have Aussie. Outside I frown, say Nu-nu-nu, Aussie!, tell her how glad I am that Harry’s not like her. But inside, I cheer her on. I admire her spunk, her never-say-die. Watch her through the window as she saunters to the gate again and again, probing the fence, the latch, and now the tight bungee-cord for weaknesses, for just the tiniest laxity. If it’s there, she’ll find it.

“You know, Aussie, you’re the first dog I’ve ever had that’s managed to open up a dog door.”

“You know that stupid sign you have up on top of the driveway?”

“You mean the one that says No Matter Where You’re From, We’re Glad You’re Our Neighbor”?

“I think you should take it down and put up another.”