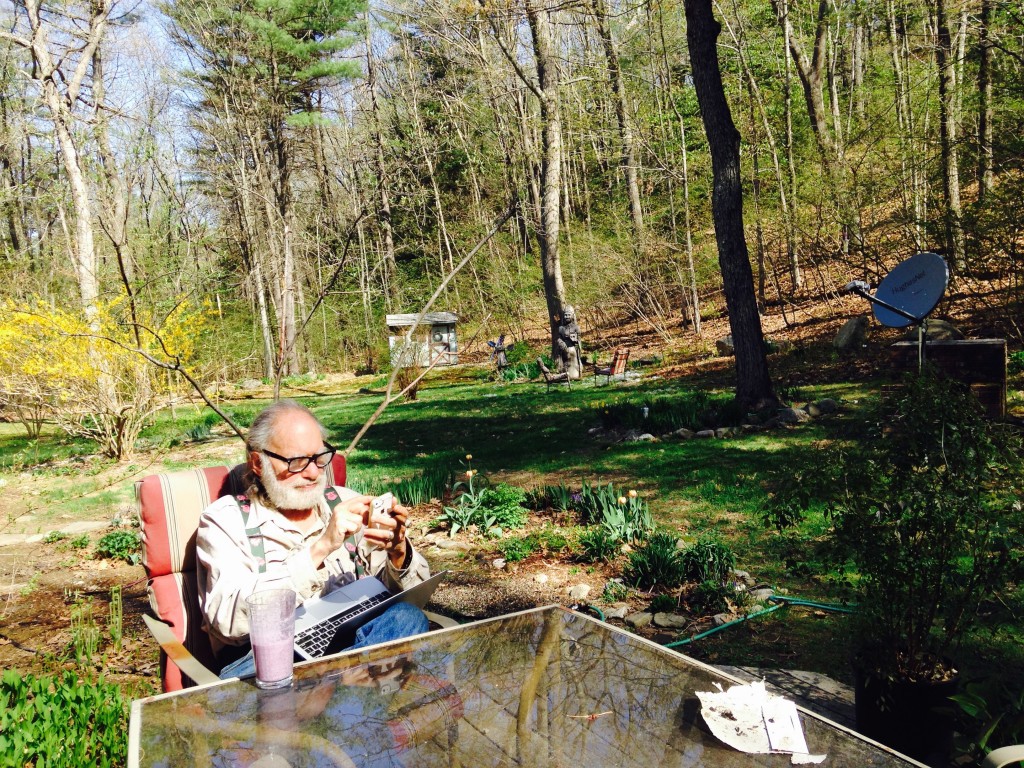 We did our winter retreat last week. My mind had been frazzled, slow, and very tired. I wasn’t sure about giving talks, doing face-to-face with students, feeling the pulse of things, just making it through the day. But I did, thanks to those who were there, visible and invisible.

There were so many crazy things about being both Bernie’s successor and his wife, it felt like incest. There were always two relationships to work out simultaneously: the teacher-student relationship, which is very hierarchical in Zen, and the husband-wife, which, at least in the West, is based on equality.

I was aware that in some people’s minds, this dual relationship compromised my legitimacy as a teacher, though our getting together as a couple preceded my dharma transmission by only 3 months, and if you know anything about dharma transmission you know it’s usually planned long in advance. I remember that at that time he and I were still finishing up our last studies, and in one dokusan, or formal face-to-face study, he told me: “If you want to end this now because it may affect the transmission, we’ll do that. I don’t want our coming together to stop you from finishing your studies.”

How interesting that he emphasized our study rather than our couplehood that early morning in Santa Fe, an omen of things to come. For in the world of engaged Zen practice, out of which you act in the world based on an ever-deepening sense of the oneness of life, there was never any argument. I had a lot of trust in him and the incredible breadth of his vision.

“Who’s the greater teacher, Shakyamuni Buddha or Bodhidharma?” he told me he once asked Koryu Osaka Roshi, one of Japan’s pre-eminent 20th century Zen masters.

“Shakyamuni,” answered Koryu Roshi. “Bodhidharma went deep, but Shakyamuni went broad. He talked to everyone, from beggars to kings.”

Bernie took after Shakyamuni. He saw practice everywhere—in businesses, in non-profits, in meditation halls, in child care centers, in the kitchen, even on Mars.

“What do you mean, he worked on manned missions to Mars back in the ‘60s?” asked the New York Times writer who did Bernie’s obituary. Of all the facts she’d gathered about him, that seemed the most strange. “You mean unmanned missions, don’t you?”

“No,” I told her, “at McDonnell-Douglas he worked on developing trajectories for manned missions to Mars. They were sure they’d put an astronaut on Mars in 20 years’ time.” And there, too, I thought to myself, would be the place for practice.

Long past retirement age he was still stretching out—let’s do work in Springfield, there’s a big building in which we could build some businesses and hire people off the street, the sheriff wants us to go into the prisons. He wanted to go everywhere and develop new tools so that everyone—not just Zen practitioners—could experience no separation.

But oh, two people living under the same roof, that’s a whole other thing. We did what other couples do—laughed, cried, sulked, talked, went mute. Argued about his lack of feelings.

“He lost his mother when he was so young,” his older sisters told me over and over again. “And he went to live with his uncaring father and new wife. So of course things happened.”

We loved Italian coffee and movies. We loved Zen Peacemakers.

“May you remember him with all his lights and all his shadows,” someone wrote me, and I thought of Paul McCartney’s song:

Blackbird singing in the dead of night, take these broken wings and learn to fly
All your life, you were only waiting for this moment to arise

Blackbird singing in the dead of night, take these sunken eyes and learn to see
All your life, you were only waiting for this moment to be free