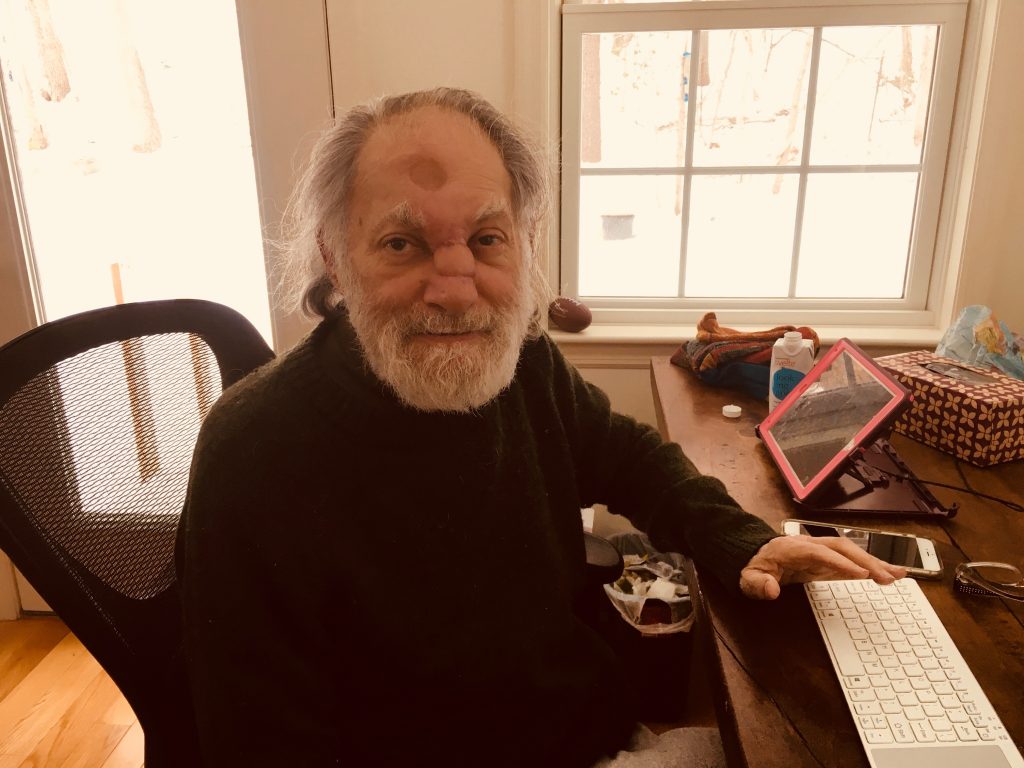 Today I took Bernie to Mercy Hospital in Springfield for what we hoped would be the last graft surgery on his nose. Less than 2 hours later we drove home, stars in our eyes, after being told he wouldn’t need anything.

Bernie has two wounds that aren’t healing after surgery and radiation to remove cancer from the bone of the nose. They don’t heal due to after-effects of radiation, leaving an already weakened bone exposed in both places. We’d gotten a second opinion, and the consensus was that he had to go back and get patched up, even stay the night in the hospital since general anesthesia would be needed.

Preparing for surgery, Bernie got a haircut yesterday. I packed overnight items for the both of us this morning and off we went down I-91, two grim, battle-scarred veterans.

In the pre-op room nurses come in to do blood pressure, pulse, EKG, and review medical history for the 10th time. One starts an IV inside his elbow and reminds us that she took care of him in his first surgery last December. “How has your summer been?” she asks Bernie, trying to distract the Great Man while getting the needle ready.

“Bernie,” I interrupt as gently as I can, “your radiation ended mid-March.”

“My summer was great,” he informs her. “Memory not so great, summer great.”

The fuss goes on for some 20 minutes, and then everyone leaves at once, informing us that the surgeon and anesthesiologist will be in shortly.

“What I’d like to do, oh Bernie my Bernie, is persuade them to let me take you home after surgery,” I think aloud.

“You know, there is one thing I can do if they tell me I have to stay overnight.”

“I’d also like to persuade them not to do general anesthesia, Bernie, but monitored sedation. You know what’s my biggest concern?”

“That you won’t tell anyone if something hurts you. You’ve done procedures with a local anesthetic, and when you come out you tell me that it hurt you, only you didn’t say anything.”

“I don’t say hurt,” he reminds me. “I say that I could feel it. Don’t forget, I have a high threshold for pain.”

I shake my head. Men!

The surgeon, Bryan Prior, comes in, which immediately cheers me up; good-looking men always do. He hugs us both, which probably means he’s seen too much of us by now. Then he looks intently at Bernie’s nose. Even more intently. And even more intently. “It looks a lot better than before,” he murmurs. “Mind if I look around?” Out comes a Q-tip and he starts rummaging around inside the wounds. “Let me know if what I’m doing hurts you, Bernie,” he tells him.

Ha! I think to myself.

When he’s done he gives us a few options. Two of them are surgical. The third is no surgery, at least for now. While he doesn’t think a general healing will take place because of the paucity of healthy tissue around the wounds, the body is obviously straining to cover up the bone with just enough thin, porous tissue to prevent infection, which was a big concern. There’s still a little bone exposed, but if things continue as they are, and if Bernie doesn’t play football, he may be able to get back into his clothes and just go home. “I’ll leave the two of you alone to discuss this,” he says.

“You should see us with our dog,” I tell her.

We hug Bryan Pryor, make an appointment one month from now, and Bernie gets back into his clothes. I wheel him out of the hospital.

“What a way to leave,” I say happily. “Remember when we left last December after the first surgery, your nose covered in bandages getting bloodier and bloodier by the moment? You scared people in the lobby and babies cried. Somebody asked me if this was Halloween. This is much better.”

“He didn’t say anything about how I look after my haircut.”