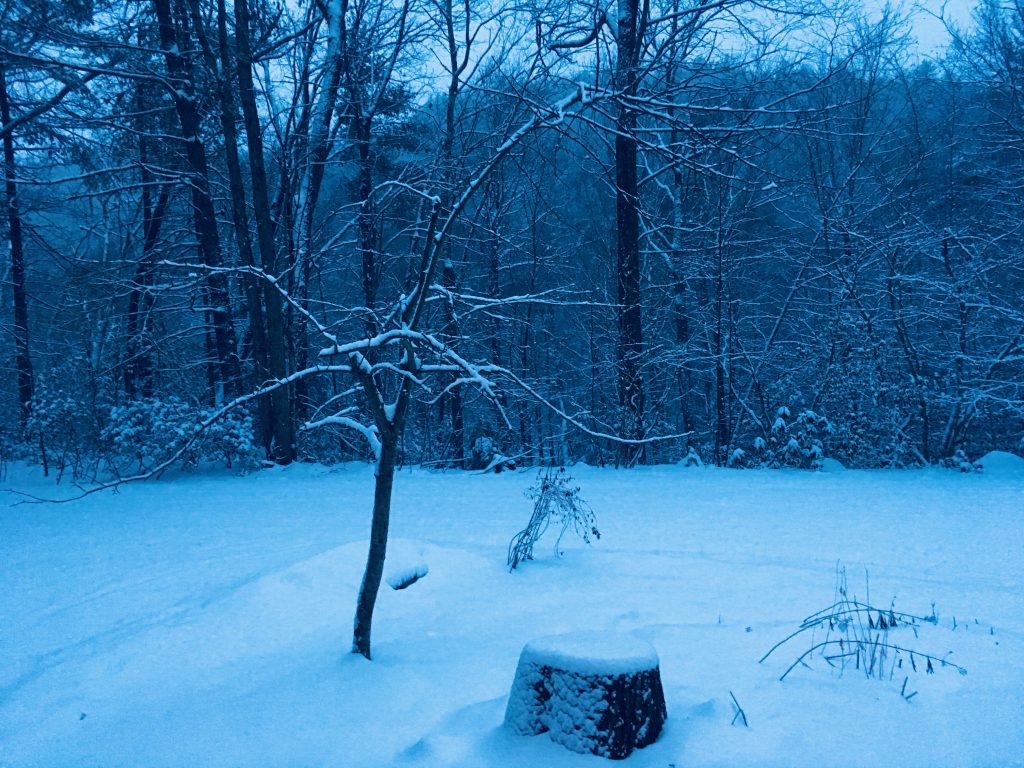 As the snow began to come down more heavily in the early evening, I left dinner to take a photo of the front of our house. On the right is a low, flat stump, all that’s left of a magnificent oak that loomed over the house for years till it was cut down this last summer. Next to it is the scraggly apple tree that will soon get the sun it needs to grow bigger.

When we’re too big and gorgeous, we sometimes get cut down to size. That’s not necessarily a bad thing. Life shows me my true proportion, which is usually a lot smaller than what I think it is.

Speaking of our true proportions, I think of our friend, Bob Lee, and the memorial service that will take place later today in San Francisco. We were in Israel together once, he, his wife Jane, a Japanese couple, and Bernie’s cousin George Plafker, renowned for his work with tsunamis and earthquakes that confirmed the theory of plate tectonics under the earth’s crust.

George and Bob decided to join a one-day tour of the great city of Petra. The rest of us bowed out, so the two men got up at dawn and joined a tourist bus group that crossed the border into Jordan and drove south. They came back late at night, tired, and in the morning, over breakfast, Bob took out a few dusty old coins and said, These are ancient, Eve, they date back hundreds of years before Christ, and I’ll give you a good deal if you buy some..

George at his side started laughing uproariously and we looked at him. What?

It seemed that the bus arrived in the parking lot of Petra, discharging the tour group that immediately began to walk the long road into Petra itself. But a young boy came around purporting to sell old coins found in the ruins of Petra. He was waved off by everyone, except Bob.

Well, let me look at them, said Bob in his deep bass, lugubrious voice. He found a seat somewhere and began to examine them closely.

George waited politely, but Bob was in no hurry, so George left and walked to Petra. Bob sat there with the young boy, bringing each coin up to his eyeglasses to look at it more closely. In the process he got lots of information: the boy’s name, where he came from, how many brothers and sisters he had, what his father did for a living, how long he’d bee peddling coins, was everybody in the family healthy, and did the boy go to school.

The boy stayed with him, convinced he’d hooked himself a dumb American tourist, and as Bob slowly examined coin after coin he kept on asking his questions: When did the boy drop out of school, could he read, what did he want to do when he grew up, and so on. He haggled carefully over each and every coin, and as part of the negotiations got the boy’s life story and the story of his family as well.

But what about Petra? I asked over breakfast. Did you ever get into Petra?

A little bit, he muttered. Didn’t get to see too much of it, but got lots of ancient coins. Made my fortune.

Ever since then, whenever he saw me,he’d say, I got a coin to sell you, you rascal. I was waiting for it when I visited him in Zen Hospice a little over a month ago.

Bob was a man who knew his true proportions.

Peter Cunningham took the photo below after a ceremony of recognition for Bob (who received dharma transmission from Bernie). Our custom was to include the giving of a bouquet of flowers to the partners of people being recognized and honored, gratitude for their support of their loved one. In this photo you see Bob, the Man of No Rank, or as we say in Zen, giving flowers to Jane, his wife, and then making three full bows to her.

She gets full prostrations, he grumbled as his knees hit the floor.